Something “Off” About This Offer: My Conversation With a Serial Harasser

UPDATE 10/14/18 This man is still harassing women in local news. If you have any information on him- numbers, emails, screenshots- please send them my way. Thanks. He may go by a different name now.

I got a phone call last Thursday I wasn’t too surprised to receive.

It was a serial harasser who targets female journalists.

My phone buzzed, the word “Unknown” flashing up on the screen. I hesitated before picking up- who answers an Unknown call?

“Hi, Ellen,” the man said. “This is Chris from NBC. I found your reel online.”

My reporter reel was on Youtube with my email and phone number. I asked him which station he was with, and where he was located. He told me New York City, at their national station.

The man sounded like he was in his late 20s, early 30s- a little awkward, a little nervous.

It did not sound like the voice of an NBC job recruiter. And generally, job offers don’t come from Unknown numbers.

At that point, I knew it was him.

I told him I was busy and I’d call him back tomorrow- but I needed his number. Oddly enough, his phone wasn’t working properly- he would call me.

Because those are all names and networks used by a man who calls female journalists and harasses them. And most likely, it’s all one man.

I first heard about “Chris” after seeing several posts on a Facebook group:

I’ve seen dozens of these stories- same setup, same structure. As I searched through posts and asked around, I found warnings about him going back to 2015.

Three years of making women feel simultaneously violated and stupid- which I’m sure is what he wants.  For someone to commit to harassing women for three years straight in this very specific manner is some next-level dedication.

While phone calls are his normal method, it looks like “Chris” sometimes emails people- and some women heard from him through both mediums. 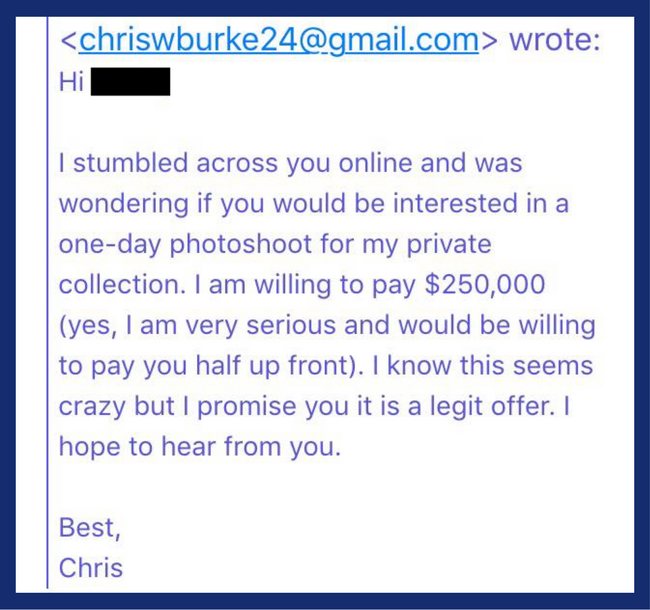 I want to make something very clear:

This man is most likely using an alias. There are a lot of Chris Burke’s out there, and there’s nothing to suggest he’s any one of them. Please don’t harass them. As time goes on, he’ll probably switch to a different name.

Now armed with his email address, I reached out.

He never responded to my email, but he did call me once more. When I started asking too many questions- where was he located; what was his name- he hung up.

And that’s where I am. Struggling to connect a name and a face to a man who spends years harassing women. Right now, an email and a voice is all I have.

If you’re a woman in TV and have a reel out there- heads up.

← Things I Ate On Breaking News Part 1: A Bag of Mixed Nuts Meant for Pigs
5 Spooky Podcasts To Get You Ready for Halloween →

9 Comments on “Something “Off” About This Offer: My Conversation With a Serial Harasser”